I read today that Shaquille O’Neal is retiring after 19 fantastic seasons as one of the most dominant big men ever.

Read my experience on playing against him early in his career.

I played against Shaquille O’Neal his first couple of years in the league when he was still with the Orlando Magic.  He was a pure physical specimen who had tremendous physical gifts and could dominate a game at will.  I was at the tail end of my career as I wrapped up my season with the Utah Jazz as a 36-year-old backup journeyman center.  I remember playing against Shaquille at a game in Orlando and I was able to hold my own against him physically.  He turned and looked at me and said that I was one of the strongest players he had to play against, and by the way, “how old are you?” he asked.    I told him I was thirty-six, and he said, “Man, you won’t catch me out here playing at thirty-six.” I’m going to be chillin’ on the beaches of Maui”.  Well when I last checked in 2011, Shaquille O’Neal was still out there playing and making a run at another championship. Shaquille grew into one of the most dominant players (and big men) of his era.  No one could handle him one-on-one and when he played with the Los Angeles Lakers, he would become a three-time NBA Champion and turn in magnificent performance after magnificent performance in dominating anyone matched up against him.  He would routinely put up numbers such as 30 points (sometimes 40 points) and 20 rebounds and lead his team to victory, all the while having a blast..  At last count. he had fout NBA Championship rings… will he get one for the thumb? 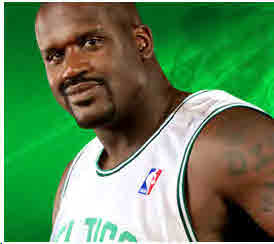