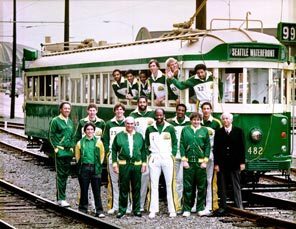 I remember this photo and team very fondly from back in 1983. I just had breakfast with Coach Lenny Wilkins this week and he’s doing great. I visited with John “JJ” Johnson last week in California. I see Fred “Downtown” Brown a couple of times a year around town.

Where are they now? Zollie Volchak, General Manager, just passed away a couple of months ago. Gus Williams lives in New York; Lonnie Shelton in California; Mark Radford in Oregon; Greg Kelser in Michigan; Steve Hawes, John Grieg, Frank Furtado, Les Habagger, in Seattle, Jack Sikma has been coaching in the NBA, not sure where David Thompson is and I think Danny Vranes is back in Utah, Phil Smith passed away several years ago and ballboy Scott Alsted is in California I believe.

I stay in touch with most of the guys and it’s good to see how we’re making our way in “Life After The Game”.

Care to share some of your Sonic memories from the 1983 team?

← James Donaldson’s Singles Magazine – Eligibles – A Little Ahead of My Time!
James Donaldson Shares his Standing Above the Crowd Concepts with the Students at Mount Tahoma High School in Tacoma, WA. – June 21st 2012 →