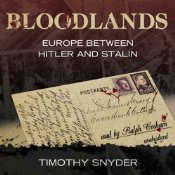 I’ve read numerous books over the years about the Holocaust, Europe during World War I and World War II, and I have studied countless other documentaries on the same subjects.  But, I don’t think I’ve ever been so thoroughly engrossed and caught up in such an accounting of Europe during that era as I was during the reading/listening of Timothy Snyder’s Bloodlands.

Even though the author probably overdid the statistical storytelling of the horrific numbers of such tremendous torture and killing, the story needs to be told, and the numbers even though hard to fathom, need to be stated so that you can at least have an attempt at realizing the unimaginable time that this world went through less than 100 years ago.

With all if the uprisings and totalitarian States that still exist in the world today, you would think that humanity would have learned its lesson by now.

Let’s just hope that we never have to revisit the magnitude and scale of the loss of humanity, misery, human torture and loss of life ever again.

It’s a shame, and all you can ask yourself is “Why God… Why?”

I highly recommend this book for those interested in world history, geopolitics, and the shaping of the world that we’ve all come to live in.