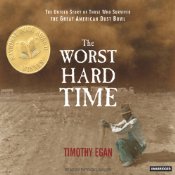 It’s the 1930’s and all around you, the country is in dire straits because of the Great Depression.  There is no escape, and then your area of the country gets hit by some of the most severe drought and dust conditions of Biblical proportions ever recorded in modern history.  Crops dry up and blow away, dust is so thick and choking that it blocks out the sun, farm animals drop right where they stand, and your neighbors are packing up and getting the hell out of there!

Those are the conditions described in the Worst Hard Time by Timothy Egan in a vivid portrayal that really does a great job in conveying the pain and suffering that so many people were forced to endure, with no help or ending in sight.

The Government had its hands tied by the Depressions that was in full swing, and these hard scrabble folks from the Heartland, hung in there and made the best of the awful situation that they could.

Great book that I recommend to everyone who thinks that the times that we’re going through over the last several years in this country have been rough, just imagine yourself in a different time and place… that actually took place on our country!