I really enjoyed the 360 interview format, in which participants also got a chance to make meaningful and useful comments on the autobiography of Malcolm X. 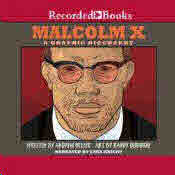 Malcolm X was an impactful civil rights figure who went about trying to serve the underserved and represent those he felt were underrepresented.

He scared the living daylights out of and was a threat to White America because of his assertive and aggressive tactics, and his mantra “By Any Means Necessary”.

Definitely ahead of his time, but he came along at a time when what he stood for, fought for, and died for was needed most.