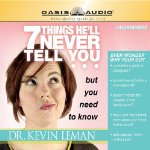 Men are “simple creatures” for the most part, and in essence, they (we) are like little boys, who have yet to grow up.  You’ll find this book to be light hearted and humorous, but there is good content as well.  Here we go….

A man’s top three needs are:
– to be respected
– to be needed
– to be fulfilled

Men don’t have a great need to talk or to be very verbal, and on average, women use 3 to 4 times more words every day than men do.

It is important for a man to feel respected rather than loved. If a man doesn’t feel respected he will tend to withdraw, shut down and become distant.

Since men have fewer friends, you (the wonderful and significant person in his life) figure much higher and your importance to him is much more than you might think. Even though men tend to get wrapped up in his ego and bravado, the most important thing to him, in being in a good relationship, is you.

Sex is one of the most important “needs” for a man. Men need to know that you are interested in sex, and that you appreciate your sexual relationship between each other. If he is satisfied with his sexual life with you, he will seek no others.

A woman’s three basic needs are:
(1) affection
(2) honest open communication
(3) attention and love for the family

Here are the list of 7 Things Your Man Won’t Tell You:

(1) He might say; “it’s Thursday, and I’ve already run out of things to tell you”, So I’m going to be nonverbal from this point on for the rest of the week, but if you want to keep talking, go right ahead.

(2) He wants you to; “think of him as a four-year-old who shaves”. Men don’t really “grow up” and we continue to behave somewhat like children, who are constantly trying to please their significant other. Easily wounded, and easily shut down, this is an important aspect of a man’s make up.

The most important woman in a man’s life other than you, is his mother. Depending on how his mother raised him and related with him, that will have a lot of influence on how he relates to you, and to women in general in his life. There are various kinds of mothers such as the “smothering mother”, “the overly protective mother”, “the overly strict mother “, and “the overly clinging mother” etc.

(3) In describing his home he might say something like; “I have a purple dining room and I couldn’t care less”. Most men can care less what their home looks like, as long it is functional and practical. Therefore, good majority of the time, he’s more than happy to let you make over the home as you would like it.

Is your guy starving desperately for attention from you?

A healthy sex life is in the social part of any good relationship. He is going to have sexual needs and desires that are totally different than yours from time to time, but if you both are understanding of this, you can have a great and fulfilling sexual life together. He is constantly stimulated with such sexual images all through the day.
Men have a much higher sex drive and are driven by testosterone.

Before you drag your husband into an uncomfortable social situation, take the time to understand his feelings, and respect the fact that perhaps occasionally, he just doesn’t want to be part of the social interaction.

Remember, women are much more social than men, so many times men will act out passive aggressively if they are not comfortable in social situations. Arrange to have a “trade off” where he may go through something uncomfortable in exchange for something pleasant later on.

Be careful about talking about your guy in public and social situations. Try not to say negative things about him, because it will only cause him to “shutdown”, and be more protective about his feelings and actions towards you. If you say anything about him, try to be supportive encouraging, as this will boost his ego and he will be more pleasant and loving toward you.

This is one of the best books I’ve read on relationships in a long time. Albeit, it’s written about men, for women (and in helping women understand their man), so it does have quite a bit of male bias throughout.

Overall though, the author plays it pretty fair, and even in regards to really taking the time to help women better understand men in general, and their man in particular.

Even as a guy, I can see that he lets men “off the hook” in more cases then might be generally acceptable in “today’s world”, but it’s still a really good read, and could be very helpful in helping spouses to understand each other better.

I feel that for the most part I am “a guy” as much as the “next guy”, but I do at least try to understand, appreciate and respect the “fairer sex”. Not a lot of guys are quite there yet (it’s a life long journey… oh yeah, you bet!… I’m still on it too!), so this book would be helpful for them as well.