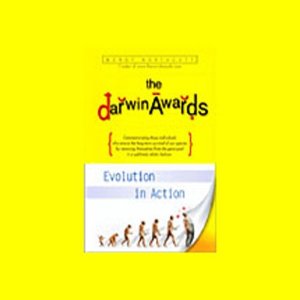 This book was a mostly humorous luck at unique ways that people found to meet their demise. Of course, “99.9% of the accounts are men” doing crazy things, and there are one or two episodes of women doing something just as crazy.

A couple of the more humorous stories that stick in my mind, are one about a small group of “outdoorsmen”, doing some “ice-fishing” on a frozen lake.  As they have their Jeep four wheeler parked out there in the middle of the lake on the frozen ice, one of them has the bright idea of throwing a stick of dynamite towards a flock of birds sitting on the ice perhaps 50 yards away.  As soon as he throws the stick of dynamite, their faithful, loyal hunting dog, takes off after it, retrieves a stick of dynamite, and comes running back towards a group of guys who are trying desperately to halt the dog (they even resorted to shooting the dog with buckshot to try to get it to stop), and the dog ran right back towards the four wheeler, as it cowered underneath the vehicle, only to have the stick of dynamite explode and blow up the vehicle, also a huge hole in the ice, and the dog was blown to smithereens as well.  The guys luckily escaped with their lives, but that’s just one of many humorous stories of humans trying to eliminate themselves from the gene pool.

Of course, there are numerous stories of thieves getting stuck in chimneys for being caught red handed by video surveillance as they are doing one boneheaded act after another.

Plenty of stories about people not paying attention, and driving smack into homes, gardens, lakes, etc.

You get plenty of laughs by reading this book, and I’m sure that during this holiday season, you probably even witness someone who can be a great candidate for the “Darwin Awards”.

The Darwin award is a fictitious award that’s made up and given to those who have found a way to eliminate themselves from the “gene pool”, and hopefully improve the human race.

If you like a little bit of humor to go along with facts, you’ll enjoy reading this book.