James Donaldson’s Book Review – The New Hate: A History of Fear and Loathing on the Populist Right by Arthur Goldwag 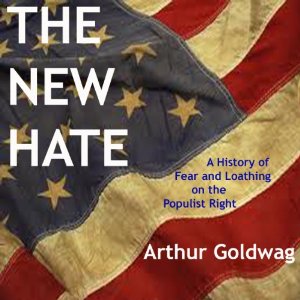 This book, “the New Hate” was a real eye-opener for me in regards to some of the outright and blatant hatred that has persisted throughout the history of the United States. I’m sure we are all very familiar with the “legacy of slavery” that kept African-Americans bound in slavery for over 250 years in United States history. But along with that, there was hatred (both political and nonpolitical) towards immigrants from other countries, poor people, Jewish people, Asian people and others.

The book is a definite poke at the right wing conservative party of our political process and how they strive so hard to “conserve” the status quo and not allow other folks to have equal opportunity has declared in the United States Constitution.

As we saw even in recent news, that the Confederate flag is coming down at several southern state capitals in the United States, and the Supreme Court just ruled that same-sex marriage is legal. This all goes to show us that the United States continues to forge ahead and leave all into a multi cultural, multilingual, multiethnic society and which so many different groups from various parts of the world are involved.

If we are to stay true to our creed, that “all men are created equal” then we will have to get past both the “old hatred and new hatred” that continues to persist to this day.

The New Hate takes listeners on a surprising, often shocking, sometimes bizarrely amusing tour through the swamps of nativism, racism, and paranoia that have long thrived on the American fringe. Arthur Goldwag shows us the parallels between the hysteria about the Illuminati that wracked the new American Republic in the 1790s and the McCarthyism that roiled the 1950s, and he discusses the similarities between the anti-New Deal forces of the 1930s and the Tea Party movement today.

I really enjoyed learning and reading about a lot of the nuances of the history of our country, and how so many of the ways of thinking, that we still cling to today, came about in the first place.

It’s apparent that the author has a “left-leaning bias” but that’s okay, because as he points out so often in this text, the right wing conservative party of our political system is basically “on the wrong side of history” as the United States continues to move forward as a progressive society.

Overall, this was a terrific history lesson for me, and I learned a great deal about what again, Pres. Obama eluded to when he talked about racism being part of our DNA here in the United States.

One comment on “James Donaldson’s Book Review – The New Hate: A History of Fear and Loathing on the Populist Right by Arthur Goldwag”