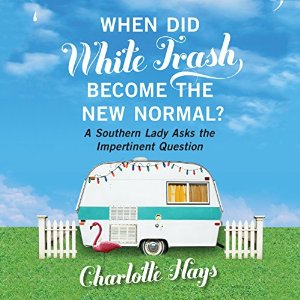 What happened to etiquette, hygiene, and self-restraint? Author Charlotte Hays, Southern gentlewoman extraordinaire, takes a humorous look at the spread of white trash culture to all levels of American society.

This book was an interesting look at “how white trash has become the new normal” and the author talks about our changing cultural mores throughout the last several decades.

She covers everything from Miley Cyrus and “twerking” to the Kardashians and Kanye West, and so much more.

I have to admit, the author comes off somewhat “prudish”, but also with a lot of sensibility about “what in the world happened to our cultural America we used to enjoy growing up?”

Yes, a lot of things have changed (sometimes seemingly for the worse), but “it is what it is” and we all have to live in today’s society.

Here the author gives a “white trash timeline” of things that have happened in our culture over the last several decades.

– 1965 – following surgery to remove his gallbladder, Pres. Johnson lifts up his shirt to show the White

House photographers the huge incision on his more than ample abdomen

– 1968 – the Hayes office closes, this is the office which governs the censorship of entertainment and

movies for the US government

her breast implants to a national audience

– 1970 – Pres. Nixon and welcomes Elvis Presley to the White House to award him with the “Bureau of

Narcotics and Dangerous Drugs” badge that Elvis will become the spokesperson for. The rest is

that much about it

– 1994 – Olympic figure skater, Nancy Kerrigan is bashed on the knee and an attempt to get her out of

the Olympic competition by her rival and her rival’s cronies, Tonya Harding

contestants and family members and a very much circus -like atmosphere

– 1995 – Princess Diana spills the “intimate beans” on her marriage, her fantasies, and the fact that she

was not very happy

– 1998 – Pres. Bill Clinton, looks into the camera and addresses the American people with the words “I

did not have sex with that woman, Miss Lewinsky”

– 2012 – With the sinking of the cruise ship the Consta Concordia off the shores of Italy, chivalry is

officially declared dead as perfectly healthy man our person aside, women and children to save

their own sorry skins

These are just a few of the incidences along the timeline of “white trash becoming the new normal” and some of the things that we have observed over the years.

As I am sitting in my living room on a Friday evening scrolling through my TV lineup for tonight, I’m looking at such trashy shows listed as “America’s Got Talent”, “Alaskan Bush People”, “iCarly”, “Dirty Jobs Down Under”, “Hardcore Pawn” and those it just shows on a Friday evening. Of course there are some great classics like MASH and Sex and the City and Seinfeld, but for the most part, our TV is filled with trashy TV shows that have a way of shaping our cultural views.

The author goes into some good detail about what “white trash used to be about”, and how the “new white trash is the new normal”.

She gives a lot of really good examples in one of her chapters at the end of the book over the last several decades of things that have happened in our society on the road to the “new normal of white trash”.

A good, interesting and entertaining book, somewhat humorous at times, a little bit “prudish” at times as well, but all in all a pretty good read.