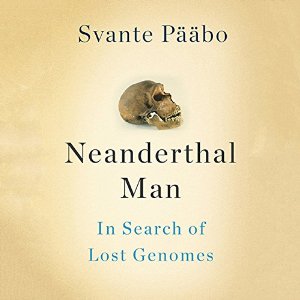 This is a pretty interesting book, overall, in which the scientific researcher, Svante Paabo, what about his research over the last 30 years or so and trying to help us understand the relationship between modern humans and the Neanderthals. There is still the age-old question about “why did modern humans survive and Neanderthal man going extinct”?

Even though this book is highly scientific in nature, is still tells a great story of the early beginnings of human beings, their various lineages throughout the millennia that eventually led to modern man. Paabo did a lot of testing, analyzing of DNA samples to try to find similarities and differences in “what does it mean to be human”?

The book is a little bit lengthy, and it drags on in some parts, especially when it gets overly scientific, but for the most part, it tells a great story of our history, and how we came to be.

If you want a good look into the early beginnings of human beings as we emerged from the continent of Africa, populated Europe, obviously encountered the Neanderthals, and then spread throughout the rest of the world, this would be a great book for you.