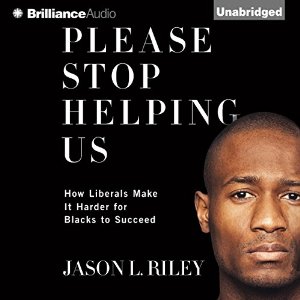 n this book, author, Jason Riley (a frequent Fox TV news contributor) sets forth to outlying reasons why African-Americans have struggled for the last several decades, and it’s because of the liberal policies of so many of our politicians, especially those on the Democratic side of the aisle. Riley takes on such sensitive issues such as health care, unemployment figures, crime, urban living, education, affirmative action, minimum wage, and so much more.

He states that the liberals well intended welfare programs, are in fact holding black Americans back. Something such as the minimum wage laws that are going into effect in various States around the country even now, may lift the wages for people who are ready employed, but they price a disproportionate number of Blacks out of the labor force and make it even more difficult for them to get employed.

Riley is not afraid to air the “dirty laundry” of the African-American communities around the country, and he “tells it like it is” in hopes that Blacks will start thinking for themselves, understanding better the political issues, and the political candidate to promise to represent them.

Black on black crime is at a very high statistic at almost every urban setting, but “soft on crime” laws contribute to make black neighborhoods even more dangerous.

Until we as African-Americans and African-American communities understand better the issues and the “bigger picture of things,” we will continue to be underappreciated, and almost taken for granted has automatic votes for the Democratic Party.

I myself, a registered Democrat, will often frequently vote on either side of the aisle depending on the issues and the candidates. I always want to “think” about the issues, how they impact not only me, but issues that I care about such as unemployment figures, job creation, healthcare, crime, education, etc., and I listen carefully to the candidates on both sides of the aisle (no matter how predictable the talking points may be) and then I take time to sit down and make a well thought out decision and choice on how to cast my vote.

We should always hold our politicians accountable for the things that they promised that they will do once they’re running for the office, but tend to forget once they get in the office. If African-Americans realize that they have 94% of the voting block of the Democratic Party for African-Americans, they could really change some things. And they can hold politicians accountable and they can even bring the party on the other side of the aisle, around to start creating policy that would be beneficial for not just African-Americans, but all minority groups, women, and the like.

I like these kind of political books, because it really gets me thinking and staying on top of things. I don’t agree with hardly anything Jason Riley says in his book, and every once in a while, I feel a “twinge of pain” in my side because of something he says are some of the “dirty laundry” that he is airing, but, truth be told, the truth has to be told. And as Jack Nicholson said in the great movie, An Officer and a Gentleman…. “You Can’t Handle the Truth”!

Anyway, a great book for those who want to be challenged in some of the things that they may think about already, and have their mind made up, and/or for those who want to expand their thinking, and realize that a lot of the social welfare programs that we’ve had in place for the last several decades, have not really work to advance the causes for African-American communities as they are intended to do. Matter of fact, a lot of the programs will forever more. Keep African-American communities “dependent” on more and more social government, and of course, politicians love to hear that, because they can make a few more promises to you, and ensure that they’ll get your vote.

A good book to read, especially for minority communities. During this political season.