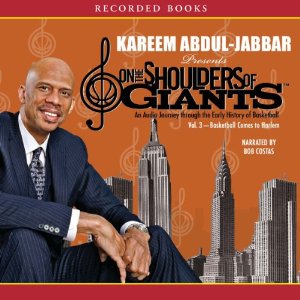 Former NBA great, and all time leading scorer in the NBA, Kareem Abdul-Jabbar, does a masterful job in bringing us the history of one of the greatest basketball teams of all time, The Harlem Rens.  Playing in an era, where Blacks were not allowed to compete nor associate with whites, and were not allowed to belong to the white professional basketball leagues of the time, nor to compete in the collegiate ranks of the NCAA and NIT campaigns, Abdul-Jabbar tells the story of how this great team was still able not only to compete, but actually to beat on a consistent basis, many of the white professional basketball teams of the day.

The team’s original lineup included Clarence “Fats” Jenkins and James “Pappy” Ricks, as well as Frank “Strangler” Forbes and Leon Monde. All four of these men also played professional baseball in the Negro Leagues. All four would also be enshrined collectively as part of the 1932-33 team that was inducted into the Naismith Basketball Hall of Fame as a unit in 1963.

By 1924-25 the “Rens” had won the first of many Colored Basketball World Championships and thereafter proceeded to dominate not just black basketball, but all of basketball for the next 25 years. During that period, the Rens routinely beat white national champion basketball teams like the Original Celtics, the Philadelphia SPHAS, the Oshkosh All Stars, and the Indianapolis Kautskys. The irony is that the leagues in which these teams played did not allow African American players or teams to join.

This audiobook is narrated by sports announcer, Bob Costas, with contributing narrations by Julius “Dr. J” Erving, Charles Barkley, Coach John Wooden who give their insights on the history of basketball as well.

Now that the NBA season is underway for yet another season, many of today’s players and fans have no idea of the origins of the great game of professional basketball. Yet, the African-American players of yesteryear, dealt with the many challenges of the day, continue to perfect their craft to become some of the very best players in the world. Once given the opportunity to join the NBA, and to compete at the collegiate level’s, African-Americans establish themselves as great ambassadors for the sport as well as some of the best players is what is ever seen.

As a “student of history” I really enjoyed reading this book and learning so much about the great game of basketball, which I enjoyed playing throughout my professional career as well. It’s hard to imagine, that 50 – 75 years ago, America was such a different place, in which sports, which are so revered today, was so segregated, and filled with the prejudices and racism’s that many of the sports leagues have worked hard to overcome.