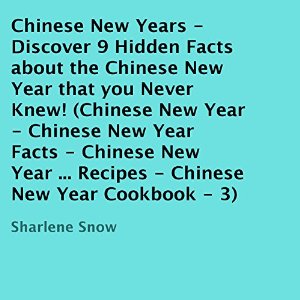 his was a fun, short and interesting read in regards to the Chinese New Year, which is celebrated not only in mainland China, but in most Asian countries around the world. It is typically held in early February, and runs almost throughout the whole month of February with vast celebrations, record-setting migrations of movement of humanity (over half 1 billion people), returning to the home towns and villages for so many of the people to pay respect to family, and their elders, and also a lot of cultural traditions such as the exchanging of the “red envelope”, eating of dumplings, setting off of magnificent firework displays, terrific meals that are enjoyed by family and friends alike, and just a wild fantastic time.

The book observed such traditions as a newborn enters into this world already “one years of age”, and then about a week after the Chinese New Year rolls around, the baby picks up another year of age, and then from then on, the birthday is celebrated on the actual birth date. So, by the time a Chinese baby is one years old (and Western standard), and Chinese culture, the baby could be actually counted as three years of age. Amazing!

Also, the exchanging of the “red envelope” which is typically stuffed with cash and given amongst friends and family is an ancient tradition that continues to this day. Also, there are proper ways in giving and receiving the red envelope, such as holding both corners of it with both hands with a slight bow. And receiving in the same manner.

I spend a lot of time in China over the last several years, so I can attest to everything in this book being absolutely true. The fireworks that shoot off continually during the Chinese New Year celebration, are the type of fireworks that are usually allowed only in the hands of professionals in the Western countries, but in China, just about everyone has the ability to set off large fireworks.

As I mentioned, the book is a short and fun read, so it won’t take you long to get through it, but you’ll pick up tons of information about the Chinese New Year and what all the commotion is about.