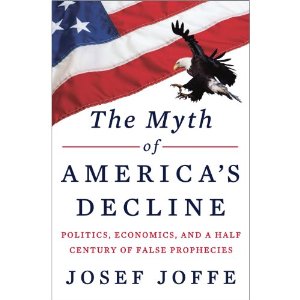 A provocative and contrarian work – filled with great lessons from history – that challenges the pervasive notion that America is on the decline.

Once every decade, it is “decline time” in America. In recent years, it has been the unstoppable rise of China that has spelled “finis America.” What the Chinese juggernaut is today, the Soviet Union (“We shall bury you”) was in the 1950s. The Vietnam decade of the 1960s was described as America’s “collective suicide attempt,” while in the 1970s, the United States succumbed to Jimmy Carter’s famous “malaise,” as the dollar dangerously plummeted. The 1980s unquestionably belonged to a resurgent Japan, the “Rising Sun,” whereas in the 1990s, Europe shone forth as an “empire by example.” In the naughts, it was “Asia Rising” that became the flavor of the decade.

Despite a litany of prognostications, these contenders have all fallen back, one by one. While it may be catnip for the media to play up America as a has-been, Josef Joffe, a leading German commentator and Stanford University academic, compellingly shows that declinism is not a cold-eyed diagnosis but a device in the style of the ancient prophets: “Thou shalt perish, unless…”

Gloom is a prophecy that must be believed so that it will turn out wrong. Joffe repeatedly demonstrates how the “economic miracles” that propelled the rising tide of challengers flounder against their own limits. Hardly confined to Europe alone, declinism has also been an especially nifty career builder for American politicians, among them Kennedy, Nixon, and Reagan, who all rode into the White House by hawking “the end is near.”

As witnessed by today’s ever bitter and partisan politics, politicians continue to talk about how much of a decline America is on and that the “end is near”, that we are losing our global standing in the world and soon to be overtaken by the likes of China, Russia, and whatever other “Johnny-come-lately”. Of course, the more conservative the politics, the more hawkish the politicians tend to be, as you can witnessed by the “carnival barking” of the entire slate of Republican presidential candidates, headed by the one and only, Donald Trump.  It’s basically a lot of “bogeyman” politics, and that the rest of the world is evil, and we are such pure souls, and our liberties and rights that we work so hard for, are at stake.

This book goes through a lot of great history, decade by decade, and which should look like another rising power was going to take the lead in the world, be it, Germany, Japan, Soviet Union, and now China. The book shows us that all of this talk has come and gone throughout the years, yet America, even with its flaws, is still better than 98% of the rest of the world.

Enjoy this book, and especially keep in mind during the presidential election campaigns that are going on, and when the politicians are telling you how poorly we are doing, just realize, that we are the best of the best here in America.