In this book, “End the Fed”, former prominent political figure, Ron Paul, writes about how the federal government and the federal bank reserves, are just way too big and influential in everyone’s life, and should be reduced to a more manageable size. 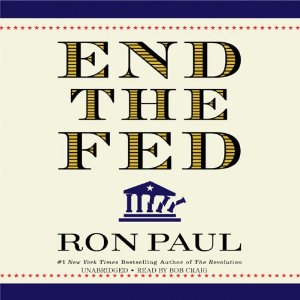 In this year of hotly contested presidential campaigns both on the Democratic and Republican parties sides, have two candidates, Hillary Clinton, and Donald Trump, who will most surely increase the size of the federal government and its influence in our lives. With Clinton carrying on the legacy of Pres. Obama, Obama care, and expanding Medicare/Medicaid and Social Security, the size of the federal government will surely increase. With Trump, talking about building a wall between the United States and Mexico, sending 13 million Mexicans back to Mexico, building up our military Armed Forces to unprecedented levels, he will be adding trillions on to the national debt as well. Wait, there was also Sen. Bernie Sanders who wanted to go the socialism route, and make attending college is tuition free, expanding Social Security and Medicare/Medicaid, he was another who is going to add trillions to our national debt as well.

Is that will we want has Americans, and we want to leave a legacy to our children and grandchildren?

Ron Paul, and his son, Rand Paul, who also had his run that a presidential campaign earlier this year, both expels the benefits of a shrunken downsize of federal government, who won’t be so intrusive in our lives, and also to withdraw a lot of our troops from overseas skirmishes which we never seem to win, but we spend a lot of money staying active with it.

This book is worth a listen to, if you are open to it.

A presidential candidates who popped up on the scenes recently, from the Libertarian party, Gary Johnson, has a lot of similar viewpoints on shrinking down the size of the federal government, so that essentially it provides national defense, and some basic needs that we all have a citizens. He’s worth listening to too.

Anyway, during this political season, it’s always good to stay up on issues and hear different points of views.