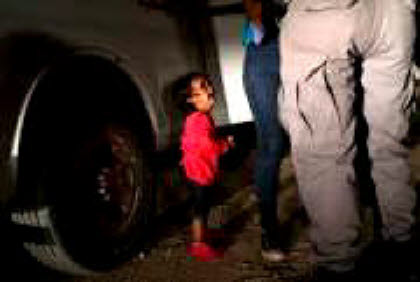 James Donaldson notes: As I’m slowly getting on top of my physical health issues, I am turning more and more of my time and efforts towards mental health issues, especially pertaining to our young people and student-athletes.

As a child and adolescent psychiatrist, I know the negative effects of separating children from their parents — long-term impacts as well as immediate terror and anguish. As a father, I can’t imagine a more horrific situation than if my sons were torn from me and my wife. I am outraged by both of these perspectives when I watch our country daily separate children from their parents on the border. In our field, we define trauma as exposure to dangerous events in which you feel fear, helplessness or horror. What we are witnessing is the widespread traumatization of children of all ages.

Being taken from their parents and placed into uncertain circumstances is a traumatic experience that will stay with these children for the rest of their lives. Research into the life course of children who have been separated from parents (Kindertransports at the beginning of World War II) or subjected to adverse conditions (Romanian orphans) shows that early trauma can seriously affect development, from learning and behavior to a child’s ability to function socially in the world.

Children who have experienced trauma may develop problems forming relationships with adults, poor self-regulation, negative thinking and a hypersensitive fear response. They learn to be wary of adults, even those who appear to be reliable since they’ve been treated poorly or betrayed. They often have trouble managing strong emotions and develop the belief that what’s happened to them is their fault. They think

everyone is out to get them and become hyper-aware of the perceived danger, leading to anxiety and chronic irritability. (Read more about post-traumatic stress disorder here.)

Every age is affected differently. In infants, toddlers, and preschoolers, forced separation is almost worse than physical harm. Their major developmental task — attachment to caregivers — is interrupted. This attachment bond functions as a blueprint for all future relationships and their primary coping strategy. Removing a parent removes a very young person’s only method for regulating emotion and learning to respond to the world. These children are left confused and afraid, setting the stage for the chronic and repeated misfiring of their fear response.

These changes cannot be turned back. Brain imaging studies have shown that the brains of traumatized children are smaller than their unaffected peers. Trauma exposure is brain damage.

Signs of Trauma in Children

For school-age children, their developmental tasks of becoming independent and expanding their social learning stop when faced with this threat to their security. For this age group, traumatic stress can result in chronic nightmares and be re-experiencing of the traumatic events. These children are constantly aware of their absent parents. They become emotionally numb and develop a negative opinion about the world around them that often seems oppositional.

Adolescents, when ripped away from the family, can be utterly demoralized. Unsurprisingly, they may lose faith in the concept of democracy. But because they are older, they face an insidious challenge, expected to raise themselves and become independent even though it is beyond their developmental capacity to be as independent as we’re forcing them to be.

We are not at war. We have no need to risk the long-term healthy development of children (not to speak of their suffering) to discourage their parents from seeking refuge here.

Surely, as Americans, we don’t believe in harming children to put pressure on their parents? As a child and adolescent psychiatrist, I can tell you that ultimatums and extremely negative consequences rarely have the deterrent effect that we intend. The same is true at the border. We have created a crisis and put our ideas at risk while harming blameless children.