After the reported suicide of Anthony Bourdain Friday morning (June 8), heartfelt messages and tributes have been pouring in from fans, friends, and co-workers.

Olivia Munn is the latest celebrity to offer her condolences, while also opening up about her own battles with anxiety and depression.

My heart is broken for my sweet friend @AsiaArgento. … Anthony Bourdain

Then, in a followup tweet, Munn shared a note in which she detailed her own mental health struggles, revealing that she has “lived with anxiety and sporadic bouts of depression for most of [her] adult life.”

She stated that while she “tackled” the disease ten years ago and has since not felt “the dark depths of depression,” before then she had suicidal thoughts on more than one occasion.

“For those who don’t understand depression, when someone is in that place it’s not because they want to die… it’s because the ongoing, relentless darkness is too painful to endure anymore,” she wrote.

“You don’t have to suffer from anxiety and depression to feel that low. Something very sad or traumatic can happen to you just once to bring about that feeling of despair.

“But please listen to me — from someone who is telling you that she’s been where you are — when I say that SUICIDE IS NOT THE RIGHT CHOICE.” 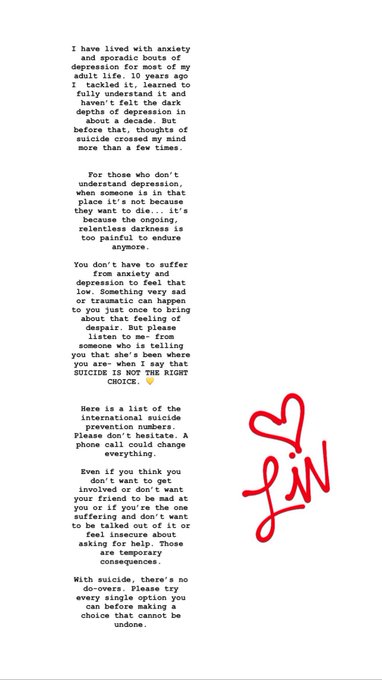 Sending all of my love and thoughts to Anthony Bourdain’s loved ones.

Munn encouraged those suffering in silence to seek help and listed a series of phone numbers to international suicide hotlines: “A phone call could change everything.

“Even if you think you don’t want to get involved or don’t want your friend to be mad at you or if you’re the one suffering and don’t want to be talked out of it or feel insecure about asking for help. Those are temporary consequences. With suicide, there’s no do overs.

“Please try every single option you can before making a choice that cannot be undone.”