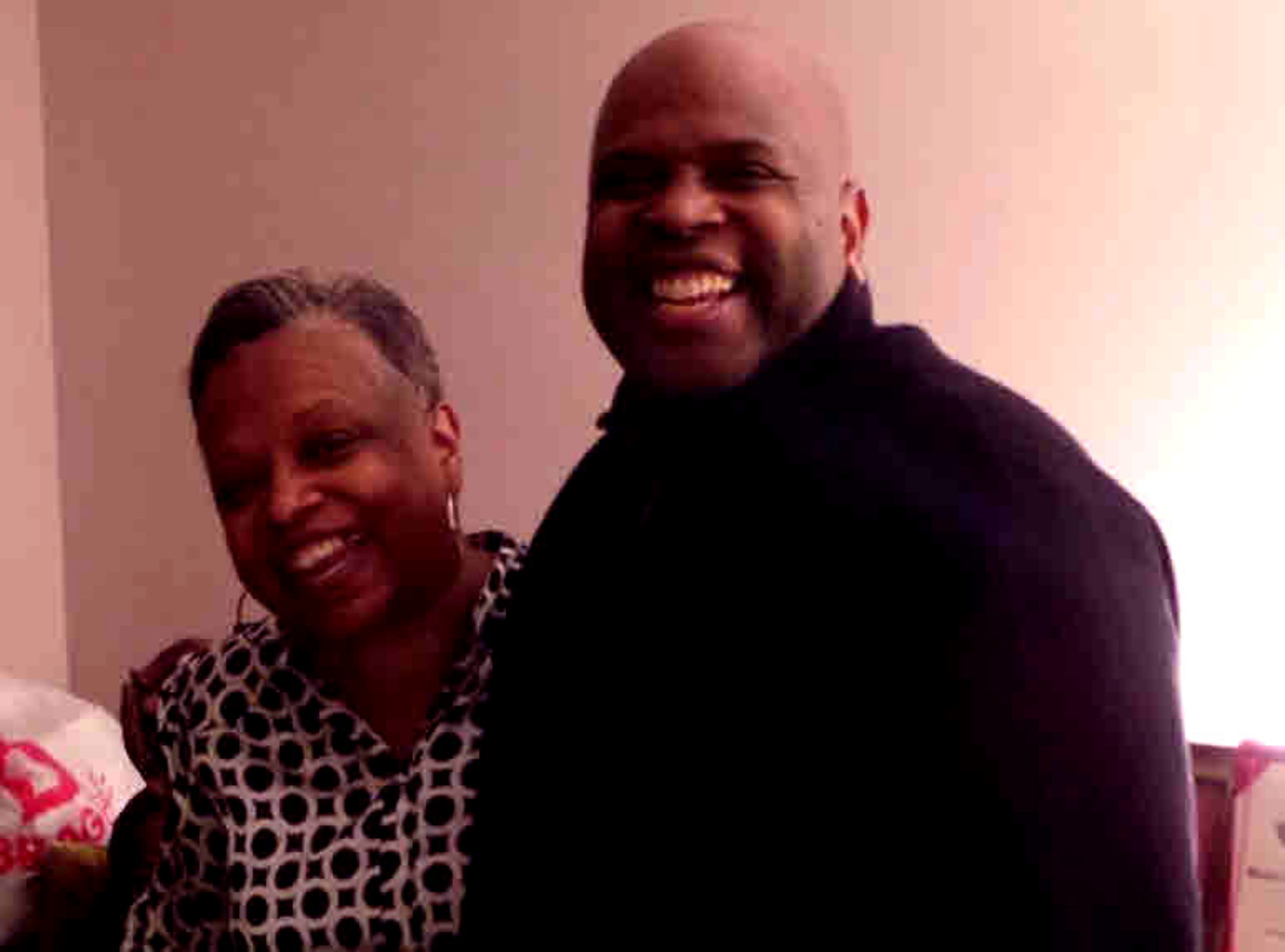 There’s an “out of darkness” bracelet on William Fallen’s right wrist. On his left forearm is a tattoo with angel wings and the date 7/7/17. And around Fallen’s neck is a cross containing some of the ashes of his older brother, Loren Hunley.

After Hunley died by suicide in the summer of 2017, Fallen looked for ways to talk about what happened, to let others know it was OK to talk about how their loved one had died. The tattoo, which he got a few weeks after his brother’s death, has led to many people

“I wanted that reminder to be with me, I wanted to always honor him, and I wanted to have a conversation piece.”

Fallen has been surprised by how many people he knows have lost someone to suicide, which kills more people each year than homicide or motor vehicle accidents. In 2016, more than 1,400 people died by suicide in Illinois, and 45,000 died nationwide. Suicide that year was the second-leading cause of death for ages 10-34 and the fourth-leading cause for ages 35-54.

Fallen says his brother’s death –– at age 46 –– was “a huge shock, there was nothing about him that said depressed. … My brother basically had a problem, and he didn’t get help (for) that problem that he needed to get.”

Only about one-third of people who die by suicide are getting mental health treatment at the time of their death, says Jill M. Harkavy-Friedman, vice president of research for the American Foundation for Suicide Prevention and an associate professor at Columbia University.

“It’s a failure of our system that all of these people who died by suicide weren’t identified and could have possibly been helped,” Harkavy-Friedman says.

Suicide –– considered by many experts to be one of the most challenging public health problems –– touches more than half of U.S. families, she notes. And the numbers have risen: The Centers for Disease Control and Prevention recently announced the national suicide rate increased in 2017 to 14.0 per 100,000 –– or 47,000 people.

Many of those left behind struggle with guilt, shame, embarrassment; they don’t understand why their loved one decided to end their life.

In the hours after her older brother’s death, Sharon Hunley didn’t know what to tell people. “No one was going to believe that someone like him would take his life. What was it? Why? And to this day, I’m still chasing why. I know I’ll probably never get that answer.”

The last year and a half have been difficult in many ways. The Dolton woman took on the responsibility of managing her brother’s property and now has to make major decisions without him. She gained weight and has trouble focusing. “I go to therapy every Monday. … It’s taken a toll. He was my best friend.”

It’s been hard on her mother, too.

At first, all Beverly Fallen would say when asked what happened to her firstborn was that he couldn’t stay here any longer. “You don’t know why he did it … you don’t want other people to judge.”

But he would laugh it off, say things were fine, Beverly Fallen says. You don’t know whether someone really is OK, but you can’t blame yourself, she says.

“Behind every number, there are family, friends, colleagues who have been deeply impacted by the loss,” says Richard McKeon, chief of the suicide prevention branch at the U.S. Substance Abuse and Mental Health Services Administration.

Earlier this fall, the federal official told dozens of health-care providers and law-enforcement officers attending a suicide prevention workshop in Maywood that the government is doing more to prevent suicide than ever before. “Hopefully, we’re getting to a tipping point … I think we are,” McKeon says.

He explains the United States didn’t have a coherent strategy to prevent suicide until 2012 when the U.S. surgeon general and the National Alliance for Suicide Prevention unveiled a plan. The aim of Healthy People 2020 is to reduce suicide by integrating suicide prevention into health care policies; transforming the way hospitals and other health-care institutions work to prevent suicide; changing the way the public talks about suicide, and improving the quality of data collected.

Harkavy-Friedman’s organization –– the American Foundation for Suicide Prevention –– has established the goal of reducing the national suicide rate 20 percent by 2025. There’s no one solution because “we’ve come to know that there are many, many contributors to suicide and no single cause,” she says.

There’s still much work to be done in raising public awareness, she and others say.

“If you knew you had a gene for breast cancer, you’d identify that risk and do something about it. We want to do the same thing for mental health,” Harkavy-Friedman says.

Seeking out mental health care, taking care of your physical health, getting help to deal with early-life trauma, learning problem-solving skills –– these are all steps that can reduce the risk of suicide, she says.

There are some positive signs, Harkavy-Friedman says: “We have evidence that the younger generation is more willing to talk about their mental health and getting help early on.”

People of all ages talking about suicide is critical, says Sharon Hunley. “If I can help one person coming out of this situation, then that’s what I’m going to do.” That’s why she’s planning a skating party for her 45th birthday that will raise money for suicide prevention.

Another way they get the word out: Every September, Loren Hunley’s mother, brother and sister participate in the American Federation for Suicide Prevention’s annual “Out of the Darkness” walk. On Sept. 22, they joined more than 7,000 people at Grant Park who together raised $1 million.

Beverly Fallen was surprised to see all the people at last year’s walk –– the first the family took part in, just two months after Loren Hunley’s suicide. The crowd was mostly white, but this year, she saw more African Americans and Hispanics.

Afterward, the family walked to a nearby South Loop restaurant. While waiting for their table, they struck up a conversation with a Hispanic woman and her husband whose 17-year-old daughter committed suicide five years ago. This was the first year her mother felt able to participate in the “Out of the Darkness” walk.

Beverly Fallen understands the reluctance, especially among families of color. “We keep it under the rug, we don’t talk about it,” she says.

Her son, William Fallen, agrees: “You can’t just pray on it. There are many avenues that help you find relief. In the black community, we don’t take those avenues. … You’ve got to get out and talk about it. Let’s talk about mental health in the African-American community.”

He will continue to welcome the questions about his bracelet, the tattoo and the cross around his neck.

5 Action Steps for Helping Someone in Emotional Pain

• Ask: “Are you thinking about killing yourself?” It’s not an easy question but studies show that asking at-risk individuals if they are suicidal does not increase suicides or suicidal thoughts.

• Keep them safe: Reducing a suicidal person’s access to highly lethal items or places is an important part of suicide prevention. While this is not always easy, asking if the at-risk person has a plan and removing or disabling the lethal means can make a difference.

• Be there: Listen carefully and learn what the individual is thinking and feeling. Findings suggest acknowledging and talking about suicide may, in fact, reduce rather than increase suicidal thoughts.

• Help them connect: Save the National Suicide Prevention Lifeline’s number in your phone so it’s there when you need it: 1-800-273-TALK (8255). You can also help make a connection with a trusted individual like a family member, friend, spiritual advisor, or mental health professional.

• Stay Connected: Staying in touch after a crisis or after being discharged from care can make a difference. Studies have shown the number of suicide deaths goes down when someone follows up with the at-risk person.