#JamesDonaldson on #MentalHealth – How To Talk About #Suicide

Social Media Editor, who loves to talk about feminism, periods and bad dates.

It’s hard to know what to say when it comes to #suicide; whether that’s comforting someone who’s grieving, trying to help someone who has attempted #suicide, or just generally discussing it. Having lost a family member to #suicide, in the years since, I’ve recognised how important language is. How the connotations of certain words can turn something well-intended into something insensitive.

There’s no guidebook for this, and every situation is personal, but it’s more vital than ever that we do discuss #suicide. In 2018, Samaritans found that there were 6,507 deaths by #suicide, and it remains the single biggest cause of death for men aged under 45. So it’s more important than ever before to learn how to talk about it.

What things to not say about #suicide…

There are a million ‘right’ things to say and do when someone has lost a loved one to #suicide, or discussing it as a cause of death. A hand squeeze, a genuine ‘are you OK?’, a phone call to check-in. But, there are a few words that are a total no-go.

“Committed #suicide” is a commonly used phrase, but it’s laden with blame and #stigma. It roots back to when #suicide was a crime, and ignores the fact that #suicide is a consequence of illness. Just as you say someone ‘died from a heart attack’, we should be saying ‘death by #suicide’ or ‘died from #suicide’. 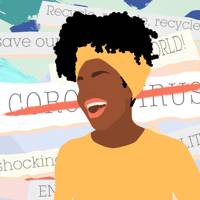 An ex-boyfriend of mine once said that my family member who died from #suicide was selfish. I dumped him. It’s a common trope; people will ask ‘But how could they leave their family behind?’ The thing is, with #depression, people genuinely feel that everyone in their life would be better off without them and that they’re a burden. Of course, this isn’t true – but your brain can trick you. For many of those who die by #suicide, it’s actually a selfless act – they think they’re bettering the lives of others by not being alive.

This is a really tough one because it’s steeped in the best of intentions. And it’s something I’ve definitely been guilty of saying in the past. Telling someone who is suicidal that ‘it will get better’ is a promise you can’t keep. #Suicide attempts, more often than not, aren’t ‘one-offs’, and suicidal thoughts can creep back in throughout a person’s life with #depression. Something I’ve taken to saying is: “Tomorrow may not be better, but the day after that might be. It might not get better but the ‘getting’ is better than nothing. Life is always better than death, because in life there are second-chances.”Chloe Laws@Chloegracelaws

I wrote this years ago. I’ve written so many things like this that are always saved in my drafts. But today is one of those days where sharing felt important. Reach out, @giveusashoutinsta is a brilliant service if you need it. #suicideprevention

They’re not just words, and the way we discuss mental health is vital – life-saving, even. If we rid our vocabulary of #stigma, it will help rid #mentalhealth itself of #stigma. If society started to speak about #suicide in a way that did’t point blame, or reduce it to a ‘choice’ or a ‘sin’, those who are suffering might feel less alone and more likely to reach out for help.